There has been an outcry this week after news broke that the main training body for journalists is proposing to give trainees the option of whether to learn shorthand or not.

Kim Fletcher, chairman of the National Council for the Training of Journalists (NCTJ) said shorthand should only be compulsory for courses in news journalism.

I’ve been a journalist for more than 20 years, working in national, regional and local newspapers.

And I can honestly say I wouldn’t have been able to do my job without being able to write Teeline notes at 100 words a minute.

Here are five good reasons why journalism students should learn the art of taking physical notes, whether they are reporting a murder case in a crown court or a Champions League football match:

If you don’t have a clear note of something which later turns out to be challenged it’s going to reflect badly on your reputation as a journalist.

At best, the subject of your interview will be unhappy and complain to your editor.

At worst you can be taken to court for defamation if you can’t prove something was actually said which later is seen to harm a person’s reputation.

2 Technology can let you down

So you’ve landed one of your dream jobs in journalism and recorded an interview or press conference on a digital recorder or on your smartphone.

How would you feel if you got back to the office to find the device has failed to record anything or background noise has made it impossible to decipher what has been said?

By all means make a recording if you are allowed to do so. But take a shorthand note too, for back-up.

3 People talk too quickly to keep up with

Research shows that a friendly conversation in English is normally carried out by using around 110 to 150 words per minute.

It might not sound a lot but there is no way you would be able to take accurate notes at these speeds without having a grasp of shorthand.

By using the shortened outlines of letters and words in a shorthand style such as Teeline you can comfortably keep up with conversations which flow at up to 150 words a minute.

There is also the possibility that you won’t be allowed to use a digital recorder or your phone to record something.

Courts prohibit the recording of cases, for example.

You may also be reporting on a story where the subject does not want to be recorded or filmed because they feel intimidated. In this case, without shorthand, you would have to resort to scribbling down notes in the hope you can keep up. 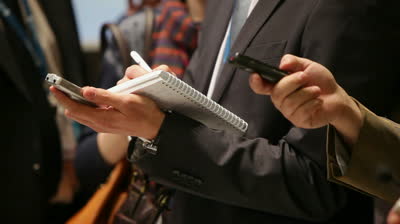 There have been many times in my career when a person has stopped our conversation to ask if I am writing notes in shorthand.

They are impressed that you have the ability to record the conversation in this strange, alien writing style.

So being able to use shorthand is vitally important for your reputation as a journalist.

The importance of shorthand skills in journalism is one of the issues I discuss in my book, How To Become A Journalist.

It’s available as a Kindle eBook or on the Amazon website.

If you are studying to become a journalist I would be interested to hear your thoughts on how important you think shorthand is to the profession so please leave a comment below.

Nick Rennie is a PR consultant and freelance journalist. He works with clients from a number of different industries, helping to raise their profile through gaining press coverage and developing their social media accounts. Nick is the author of a new book called 66 FREE Ways to Promote Your Small Business, which is a PR handbook for entrepreneurs, SMEs and start-ups.